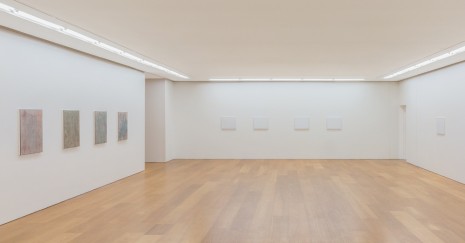 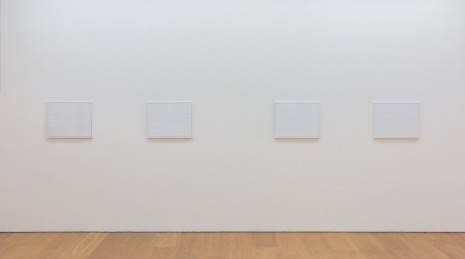 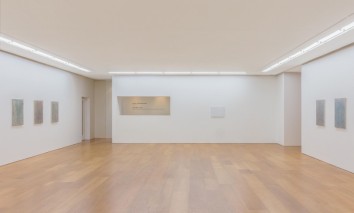 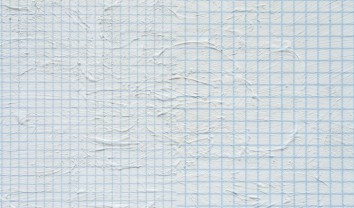 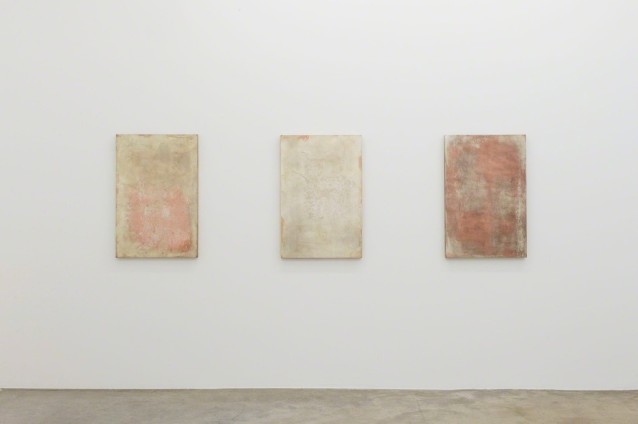 John Henderson’s oeuvre has long revolved around the problematic
of modernism, abstraction, and the painterly gesture. In this sense,
he could possibly be situated in the context of a larger wave of processbased
abstraction in recent years, one that is marked by the flatness
of the picture plane, a preoccupation with process, and improvised
gestures indexing the real. As the critic David Geers has argued,
this trend is “in equal parts, a generational fatigue with theory; a growing
split between hand-made artistic production and social practice;
and a legitimate and thrifty attempt to ‘keep it real’ in the face of an
ever-expansive image culture and slick ‘commodity art’.”1
Yet what sets Henderson apart is his reflexive distance to the painterly,
putting the romance of the authorial gesture and the assumption
of an unproblematic spectatorship into question. On the one hand,
the artist admits the performative element to his work, but on the
other, he problematizes it by “translations”, “documentations”,
and erasures. Understanding painting as performance is, of course,

nothing new. Since the heyday of Abstract Expressionism in the 1950s,
when the critic Harold Rosenberg declared that henceforth paintings
would be “an arena in which to act… What was to go on the canvas
was not a picture but an event”2
, the performative gesture in painting
has been a guarantee of presence. In the present age, this guarantee of
presence also firms up the value of painting in the face of digital and
new media incursions. Henderson’s oeuvre, however, problematizes this
performative gesture, frustrating a simple relation of the picture plane to
the real, or more specifically, the link between the painterly gesture to
the biographical real invoked in much process-based abstraction.
His earlier series of works, for instance, involved what the artist called
“translation” or “documentation”—basically an extra layer that stymies
a simplistic interpretation of the gesture of the artist’s hand (along with
whatever the narrative imbued therein). In Casts and Types (where
the artist casts sculptures of his original paintings in various metals)
and Recasts (a parodic series where such paintings are finished with
metallic spray paint), Henderson combines the individualistic
expressivity of the brush with the industrial procedures (of the foundry,
in some cases)—and thus constitutes a cool-headed, formalist
resistance to some of the pitfalls of process-based abstraction.
One is also reminded here of the post-structuralist philosopher Jacques
Derrida’s notion of “under erasure” (sous rature). In relation to writing,
this is “to write a word, cross it out, and then print both word and deletion,”3
or yet “the mark of the absence of a presence, and always already
absent present, of the lack of the origin that is the condition of thought
and experience.”4 The notion of “under erasure” is the “strategy of using
the only available language while not subscribing to its premises.”5
Henderson’s approach certainly points to a sophisticated deconstructive
doubleness: presence/absence, origin/copy, and so on, which ultimately
also opens up questions about the present condition of painting.
The title of the show, “re-er”, is therefore worth elaborating on,
with the prefix “re-” indicating repetition (“re-new”) or a backward motion

(“re-trace”), and the suffix “-er” indicating a comparative degree
(“flatter”). By putting expressive abstraction “under erasure”, Henderson
complicates it, distances himself from it, and thereby places it in play,
generating a thoughtful complexity that gestures at possible future paths.
In a way, we can see this in almost literal terms with Untitled Paintings,
where Henderson expressively and meticulously applies each layer
of paint, before removing the paint with trowels, palette knives, and hard
rollers to achieve a flat surface. This additive subtraction renders
a rather haunting, ethereal atmospheric picture plane that alludes
to loss, ruination, and memory (one could think of Freud’s wax tablet
model of memory); the original mark-making hand cannot be seen and
yet the traces are still visible. While this palimpsestic effect complicates
the authorial or painterly presence, the slight bezel on the edges
might also highlight the constructed nature of the images.
The new series Reticle (model) presents paintings on MDF panels
with thick white impasto strokes overlaid by blue grids of different
scales. While the white background might for some viewers be redolent
of the works of Robert Ryman, or else suggests a modernist “clean slate”
that negates prior values, the artist sees it almost as “models of
paintings” that he performs according to pre-existent templates and
languages. Meanwhile, the blue grids are printed directly onto the
painting and—over a caesura—on the “frame” (note that the frame
is in fact part of the painting). Certainly, as the critic Rosalind Krauss
argued back in 1979, the grid is an “emblem of modernity” in art since
the early 20th century—one sees this from Malevich and Mondrian
to Ellsworth Kelly and Sol Lewitt, among many others—linking up science
and rationality (graphs and maps) all the while declaring the autonomy
of the realm of art (turning away from representation and figuration,
turning its back on nature).6 That the blue grids extend across a break
to the edges of the “frame” suggests a “centrifugal” reading of the
grid here: the grid extends infinitely outwards, forcing the viewer to
reckon with the world beyond the frame. The title “Reticle”—the lines
in the eyepiece of optical devices—is also illuminating, for it suggests
a particular position for the viewer, as though there were an extra
digital layer of the camera interceding between the eyes of the viewer
and the painting itself; this reading is also reinforced by the different
scales of the grids, alluding to shifting foci of vision (for example,
when zooming in or out). Together with a consciousness of the
history of painting in the last hundred years, these paintings also
evince an awareness of how paintings are viewed—these days, more
often than not through the camera of a mobile phone.
In a way, this train of enquiry extends from Henderson’s earlier photographic
series Flowers, (where he had photographs painted over, then digitally
scanned, and fictively displayed in a simulated space, and then finally
printed as photographs of unique copies). Such a complex overlay of
painting and photographic processes direct attention to the possible
manipulation of images and serve as notice to viewers to observe closely
and pay attention, all the while aligning the aesthetic with the cognitive
and the critical. With Reticle (model), juxtaposing the personally
expressive strokes and the rationality of the grid generates a tension
between spontaneity and construction, while positioning the modernist
emblem of the grid in relation to the digital ushers in questions
about the importance and condition of painting in the larger, almost
overwhelming expanse of visual culture and digital imagery. 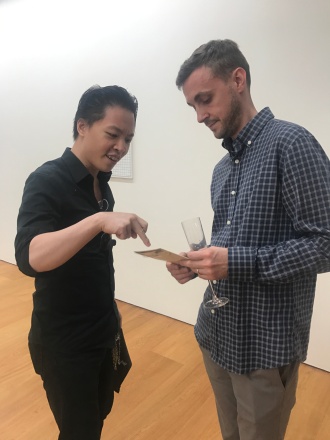 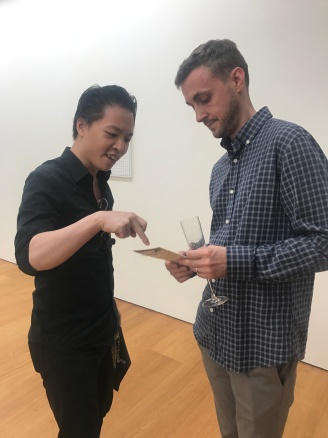 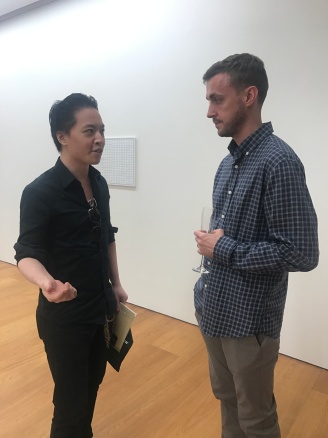 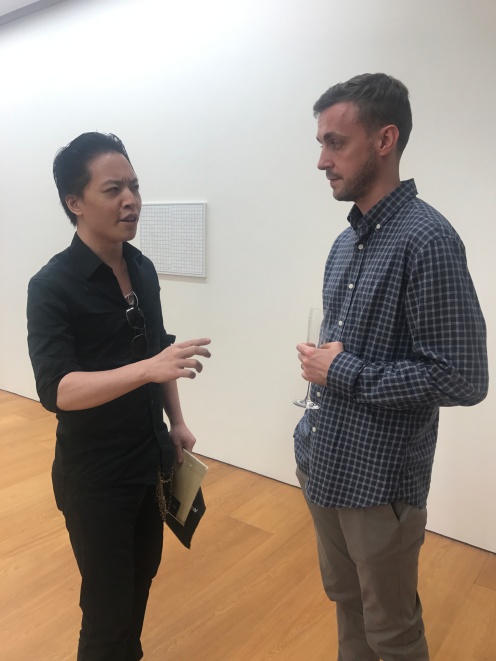 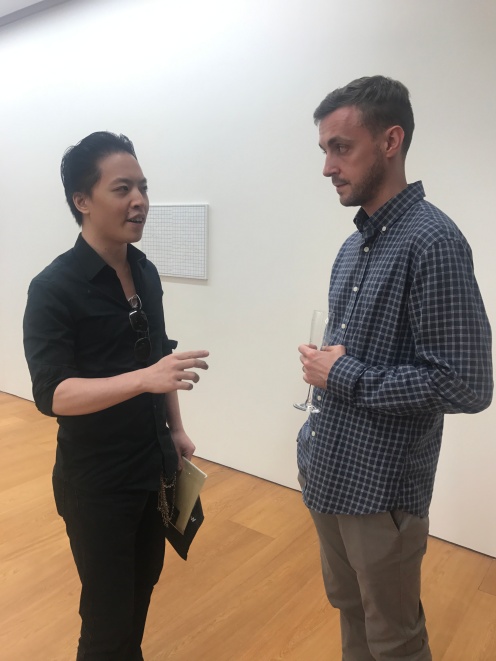